Uttar Pradesh SSSC Jr Asst & Junior Clerk solved model question paper is given below. Written Exam will be conducted for the recruitment of JA JC exam 2020. Download link of previous years model question paper is also given below in PDF format. There will be MCQ objective type questions for the recruitment of Junior Assistant in Uttar Pradesh. The Question Booklet contains 80 questions from subjects like General Hindi, Mental Ability Test and General Awareness. Recruited Kanistha Sahayak and Kanistha Lipik are posted in various Government Offices in the state of Uttar Pradesh. Those who are preparing for the exam must include the last years old papers in their study schedule. UPSSSC Junior Assistant Clerk Previous Year Model Question Paper or old question papers are very important for any competitive exam. Downloading of Previous Years question paper gives you a general idea of the forthcoming question set. UPSSSC publishes the recruitment notice of Junior Clerk and Assistant on their official website upsssc.gov.in. 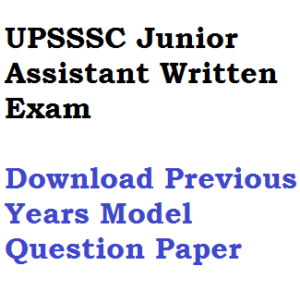 Model answers / explanation / answer keys are given also.
1) Among the remedies of inflation we cannot include:
(a) better capacity utilisation
(b) lowering bank rate
(c) reducing budgetary deficit
(d) an efficient public distribution system
Ans: (b)
2) The beat specimens of Mauryan art are represented by their
(a) Stupas
(b) Pillars
(c) Chaityas
(d) Caves
Ans: (b)
3) The later Mughal King, popularly known as Shah-i-Bekhabar (the Heedless King), was
(a) Bahadur Shah
(b) Jahandar Shah
(c) Muhammad Shah
(d) Shah Alam I
Ans: (a)
4) The medieval Indian Sultan who has been called the “Prince of ‘Moneyera” is
(a) Akbar
(b) Sher Shah Suri
(c) Muhammad-bin-Tughluq
(d) Alauddin Khalji
Ans: (c)
5) Select the word which can be formed from AUTOGRAPHS.
(a) GREAT
(b) THROUGH
(c) SHORT
(d) TROPHY
ans: c
6) The total number of sigma bonds in between (C2H6) IS
(a) Six
(b) Seven
(c) Four
(d) Five
ans: b
7) Which Indian city has the highest population, according to 2011 Census?
(a) Kolkata
(b) New Delhi
(c) Chennai
(d) Mumbai
ans: d
8) What is the total membership of the commonwealth?
(a) 42
(b) 44
(c) 54
(d) 52
ans: c
9) Which of the following groups suffer the most from inflation?
(a) Debtors
(b) Creditors
(c) Business class
(d) Holders of real assets
Ans: (b)
10) Rupee was devalued by what percent in July 1991 ?
(a) 18
(b) 20
(c) 22
(d) 25
Ans: (b)
11) The most profound influence on the drafting of the Indian Constitution was exercised by the
(a) U.S. Constitution
(b) British Constitution
(c) Government of India Act, 1935
(d) French ideals of Liberty and Fraternity
Ans: (c)
12) Which of the following Acts gave representation to Indians for the first time in the Legislature?
(a) Indian Councils Act, 1909
(b) Indian Councils Act, 1919
(c) Government of India Act, 1935
(d) None of the above
Ans: (c)

Year wise old question papers (last 5 / 10 years) may be found from the link given below when UPSSSC uploads it. The candidates are advised to download the Free PDF question papers of UPSSSC Jr Clerk Assistant Exam specially of the years of 2015, 2014, 2013, 2012 etc to firm their grip in the exam hall.